← more from
New Amsterdam Records
Get fresh music recommendations delivered to your inbox every Friday.
We've updated our Terms of Use. You can review the changes here.

Mass for the Endangered 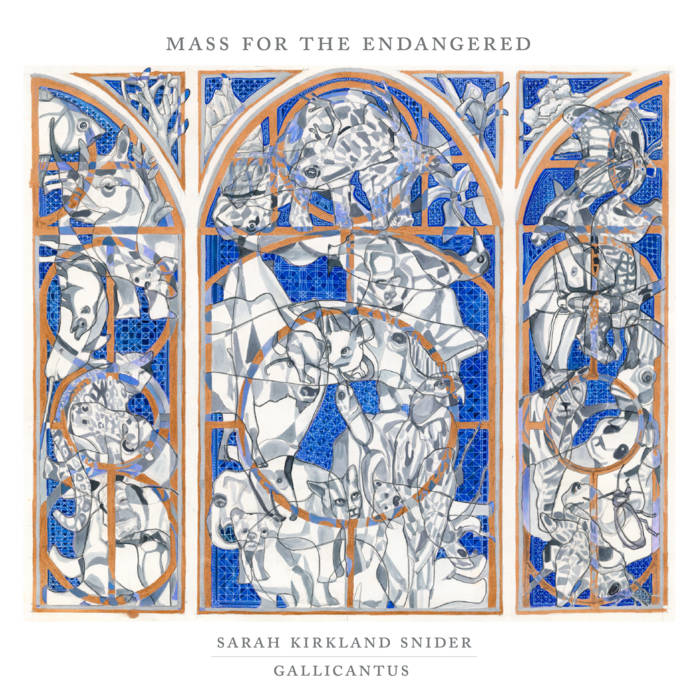 josiahmarineau This music is gorgeous. a wonderful addition to my sunday morning.

Sven B. Schreiber (sbs) Sarah Kirkland Snider releases an album every five years: 2010, 2015, 2020... so this is a lucky year, with another awesome work of hers. This mass is a masterpiece of contemporary avantgarde music, with lots of counterpoints and polytonal chords. Really not easy to listen to, but exceptionally mind-blowing, if you manage to stick to it. Favorite track: Credo.

nankaiduck78 One of the most beautiful pieces of music to be released in years. Goosebump-inducing. A stunning adapation of an ancient sacred form to a modern idiom, and one of the most effective musical expressions of the trauma being wrought on our planet. Incredible.

Composer Sarah Kirkland Snider’s Mass for the Endangered, the fourth record in a partnership between New Amsterdam and Nonesuch Records, will be released on September 25, 2020. A video for “Sanctus/Benedictus” from the Mass, made by Deborah Johnson/CandyStations, is now available and is the first of six videos created for the project.

Snider’s Mass, with a libretto by poet/writer Nathaniel Bellows, is a celebration of, and an elegy for, the natural world—animals, plants, insects, the planet itself—an appeal for greater awareness, urgency, and action. Originally commissioned by Trinity Church Wall Street, this recording features the English vocal ensemble Gallicantus conducted by Gabriel Crouch.

The six-movement Mass for the Endangered is a rumination on the concept of the traditional Catholic Mass, its fidelity enhanced by Snider’s interpolation of traditional Latin text for the Gloria, Sanctus/Benedictus, and parts of the Kyrie, Credo, and Agnus Dei. For the album art, Bellows created an illustrated triptych of endangered flora and fauna that evoke medieval Christian altarpieces and stained-glass windows.

Snider explains, “The origin of the Mass is rooted in humanity’s concern for itself, expressed through worship of the divine—which, in the Catholic tradition, is a God in the image of man. Nathaniel and I thought it would be interesting to take the Mass’s musical modes of spiritual contemplation and apply them to concern for non-human life—animals, plants, and the environment. There is an appeal to a higher power—for mercy, forgiveness, and intervention—but that appeal is directed not to God but rather to Nature itself.”

Growing up in Princeton, NJ, one-time home of the American Boychoir School, Snider attended that venerable institution’s co-ed summer camp as a youth: “I attended for five summers. I fell in love with choral singing there, and later sang with the Princeton High School Choir, which was at the time one of the most celebrated high school choirs in the country. These experiences were profoundly formative for me, and I learned a lot of the choral repertoire. I felt very at home in that music, but I hadn’t yet had a chance to explore it in my writing in a significant way. The Mass was my first large choral commission, and I was thrilled to immerse myself in memories of singing the Mozart, Brahms, and Fauré Requiems, the Palestrina and Byrd Masses, the Bach chorales.

“Rather than consciously upend those traditions,” she continues, “I wanted to open the gates in my mind between centuries-old European vocal traditions and those of more recent American vernacular persuasion, and write from a place where differing thoughts about line, text, form, and expression could co-exist.”

Recently called a “significant voice on the American music landscape” by the Philadelphia Inquirer and “an important representative of twenty-first century trends in composition” by New York Classical Review, composer Sarah Kirkland Snider writes music of direct expression and vivid narrative that has been hailed as “rapturous” by the New York Times, “groundbreaking” by the Boston Globe, and “poignant, deeply personal” by the New Yorker. With an ear for the poetic and the architectural, Snider’s music draws upon a variety of influences to render a nuanced command of immersive storytelling. Of her orchestral song cycle, Penelope, Pitchfork said: “Snider’s music lives in … an increasingly populous inter-genre space that, as of yet, has produced only a few clear, confident voices. Snider is perhaps the most sophisticated of them all.”